As part of this summer’s reading, I recently finished The Most Human Human: What Artificial Intelligence Teaches Us About Being Alive, by Brian Christian.

It was a wonderful read.

Written way way back in the dark ages of 2011, it predates the current AI and bot boom that we are beginning to see, which in my opinion brings a nice perspective.

“The Most Human Human is an award given out each year at the Loebner Prize, the artificial intelligence (AI) community’s most controversial and anticipated annual competition. The event is what’s called a Turing test, in which a panel of judges conducts a series of five-minute-long chat conversations over a computer with a series of real people and with a series of computer programs pretending to be people by mimicking human responses. The catch, of course, is that the judges don’t know at the start who’s who, and it’s their job in five minutes of conversation to try to find out.

British mathematician Alan Turing famously predicted in 1950 that computers would be passing the Turing test - that is, consistently fooling judges at least 30 percent of the time and as a result, generally considered to be intelligent in the human sense—by the year 2000. I decided to call up the test’s organizers and get involved in the 2009 contest as one of the human ‘confederates’—which meant I was both a part of the human ‘defense,’ trying to prevent the machines from passing the test, and also vying with my fellow confederates for that intriguing Most Human Human award. The book tells the story of my attempt to prepare, as well as I could, for that role: What exactly does it mean to ‘act as human as possible’ in a Turing test? And what does it mean in life?” 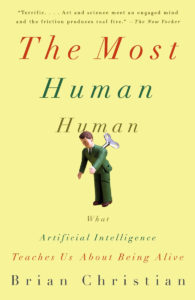 It’s a riveting book, which explores what it means to actually be human. Easier to prove at this point in time, but as computers get smarter and smarter, the lines will most assuredly blur. We have come such a long way since Christian wrote this book, and we are only just beginning to see the way AI (or “bots” as the front-end of the technology is commonly referred to today) will shape our everyday lives.For the past year I’ve been fortunate to have been a beta user of X.ai, an AI driven meeting scheduler. My “assistant” Amy Ingram (A.I.), and I communicate multiple times each day via email, and “she” also communicates with everyone I set meetings with. In the past 365 days, she has scheduled over 600 meetings for me, with very few mistakes (far less than a human assistant would make). More impressive, I’d estimate that 8 times out of 10, the people who Amy communicates with do not realize that she is a bot.

Much has been written about Amy. Along with countless other beta users, I find myself writing “please” and “thank you” to her - even though she is just a robot and doesn’t “care” about those words. But to me, Amy such a crucial help to me and my work, and she communicates in such a “human” way that it would feel rude not to treat her the same way I would a human. Likewise, I’ve found that many of my contacts (even those who know she’s a bot) continue to treat her with kindness. There are stories about Amy receiving flowers and chocolates as well.

I find the world of AI and its applications to be most exciting, and I can’t wait for my first self-driving Tesla. At the same time, Christian’s book is a reminder about the importance of continued self-exploration, self-discovery, and the limitless potential of human invention.