Back in October of 2008 (only a few weeks after the world blew up and a few months before the startup I was working at also exploded) I wrote a cryptic note on my personal blog comparing the hype cycle/startup life cycle curve versus the valuation “J-Curve.” By layering the two curves on top of each other, I argued that there are a few optimal points in the lifecycle of a startup to sell equity (raise money but ideally an exit) and conversely a few optimal points to invest. Before the advent of “seed funds” and “bar bell” investment strategies, I cryptically wondered if entrepreneurs needs to learn to sell their companies earlier than what had previously been the norm –when early adopters and the law of small numbers make the founders look like geniuses. VC’s on the other hand should either embrace the small exit or wait out the “long road back” to invest at the cross over stage. (I’ll get into more of it later).

Recently a few influencers in the business started talking about the life cycle curve again which brought me back into my old blog to dig up the post to add to the echo chamber. The Gartner “Hype Cycle” has been around for as long as I could remember. Paul Graham’s Start Up Curve is a colorful and contemporary re-interpretation (Gartner was really focused on the enterprise market). Doug Pepper of Interwest added an important voice on a post @ Techcrunc by providing in depth examples of companies and industries that followed the pattern.

It is generally accepted that startups and entire industries typically achieve significant hype and mind share in its early days due to novelty, and potential. But of course, reality rarely matches the original market assumptions and it takes most companies a long time to actually cross the chasm and achieve mass product – market fit. In a rational market, the valuation of a startup should match exactly to revenue or measurable traction. But of course, venture capital is far from a rational market because we all have to make bets on imperfect amount of information. So sometimes we make smart bets, other times we lose all discipline and push all in when we barely calculate the odds. We make ourselves feel better by muttering to ourselves that we can’t make any money if we don’t put money to work. (or something about the CAPM model if we are even more delusional). 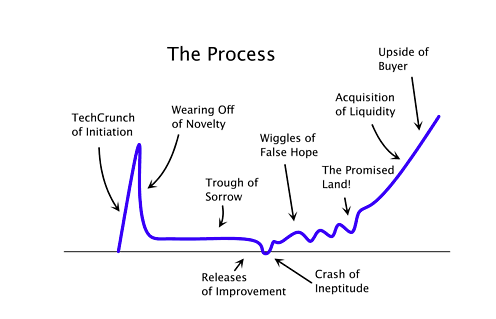 Entrepreneurs need to understand where they are on the hype cycle and be realistic about the long term potential of the company. Typically that means raising as much as possible @ seed and A and have the cash hoard to fight your way back when no one will talk to you. Or if you are lucky enough to have achieve early adopter product-market fit and have acquirers beating on your door – think really hard about whether you need to hit that homerun or not – right now .. . at this very moment. The cynic in me says the objective is to maximize the valuation delta between market expectation and actual traction of a business. The optimist in me says it’s the entrepreneur’s obligation to his/her shareholders and employees to try hard to find the right acquirer that will be willing to invest resources into your business when you eventually hit hard times – many times it’s a better path than continue to beg for money from VC’s. By no means is the goal to build companies to flip – no one wants to buy features anymore not even Google. Its just a fact that most of us are not Zuckerberg or Dorsey or Morin – much less Steve, Bill, Jeff, and Michael (Dell) . . . or atleast not now. . . maybe the next startup.